The Melt Down - Grilled Cheese Fabudelish 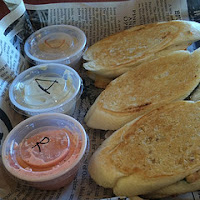 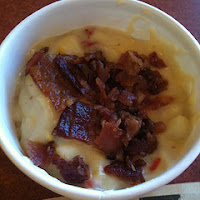 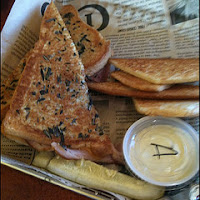 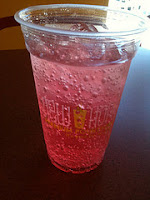 So, I take my friend Darin out for his birthday and sparing NO EXPENSE I took him to the Melt Down because I was eager to try it. I mean, am I a gre
at friend or what?
Let's start with the good news.
I had
the Signature Sliders - a smaller (but totally filling) version of their most
popular sandwiches: The Baja (LOVED IT), BLT (eh. Fine, but didn't really SING with bacon), and the Cheesy Caprese. The Caprese has balsamic vinegar on it, and I am a freakishly in love with BV, so I really enjoyed that. The dipping sauces were okay - fun but didn't make or break the sandwiches. I also had a cup of bacon corn chowder. YES! It was fabulous! Smokey bacon and sweet corn flavor. I was seriously full HOWEVER, I HAD TO TRY the signature grilled ice cream sandwich. I thought I'd just have a bite since I ate ALL my lunch and didn't want to overdo it, but, um, yeah, I ate the whole fking thing. It was fabulous!
Darin had the ham and cheddar melt, which he said was really good, except that it has rosemary butter and the rosemary was just a bit overpowering.
Oh, the sodas are awesome! They are natural (if there is such a thing) and come from New Hope Premium Fountain. I had the watermelon creme, which was not only delish, but it was pink. Way cool. I also tried the Skinny Root Beer and it, too, was great.
Oh, the girl who waited on us, besides being super cute, she was super sweet.
Now, the thing that kept this from 5 stars.
I just didn't dig the interior vibe. The yellow walls and red furniture made me feel like I was in a junior high cafeteria that had just a massive mustard/ketchup food fight. And it's quite small.
Since Grilled Cheese is a comfort food, Darin made the observation the place should feel cozy, and it lacked warmth.
But, I can't say enough about the creativity and fun aspect of the food - not to mention it was really delish!