South America No Fan Of Obama 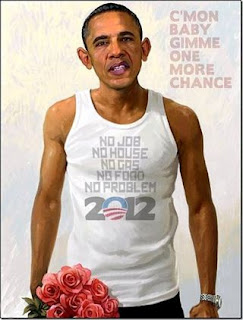 What a relief to know that Obama will be out of the country this weekend, sparing us from more class warfare attacks.
In doing some research for "Obama's Diary" - I stumbled on this online paper from South America - discussing Obama's visit to Colombia this weekend for the Summit of Americas. Interesting to see they see through Obama's lies and see him for the failed President he is. Here are some excerpts from the comments:

"Now KFC has access to the most anti-British US President for more than 200 years, she should really give it her best shot over “the Malvinas question”. She should be able to tease a few more weasel words from Obama, for all the good it'll do her."


"Yes I expect that will be the tone of the conversation after the strong moves against Argentina by the USA recently."

" Given that the US presidential elections are this year and the fact Obama is unlikely to be in office for another term, then what obama says of does will be irrelevant as by the time hes said it - minutes later (political time frame sense) hes out the door and in comes his replacement who gauranteed to be much more supportive of the UK and wanting to undo the damage done to USA UK relations by Obama!"

"This summit will be interesting. I expect nothing but weak statements from Obama (as usual), but I hope when, in the middle of another topic no doubt, KFC brings up the Falklands, Canada kindly tells her to fuck off. Venezuela, Brazil etc are now attacking Canada and the US for not letting Cuba come. We now know 100% which side of the communist fence they are on."