Day 2- Breitbart in Action - It's All About Appearances


Okay, this sounds simple, but it's quite effective.

As I've mentioned, I live in Birkenstock wearing, non arm pit shaving, liberal loving area. Back when I was slowly waking up and found myself anti Socialist Obama, I would never EVER have thought about wearing a Conservative T-shirt. I'd wear patriotic clothing, but never anything that clearly showed how I felt. I didn't want  people to hate me without first getting to know how sarcastic yet sweet I could be.
Every so often, I'd notice someone wearing a NOBAMA or I WANT MY CHANGE BACK t-shirts and it would take all my strength not to run  up to the person and embrace them in a hug. They were MY PEOPLE!!! They were smart! Most of all, they were brave - venturing out in a sea of blue libs.
Whenever I saw someone wearing their love for America - it gave me optimism and then when I finally committed myself 100% to waking up and leading other sheep away from pastures of government control and into pastures of red white and blue where they can graze freely...I bought, and proudly wear t-shirts that bring about snickers and sneers when in the presence of Obama sheeple. But Breitbart taught me to be fearless and that their are strength in numbers.
So if you haven't yet...buy a t-shirt or two and wear it proudly. 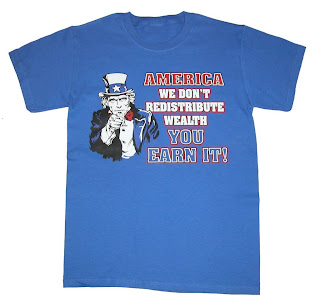 I bought my first TShirt from Amazon for only 7.99 and free shipping (I'm a Prime Member) click here for link.
So even if you're pinching your pennies, you can find a good deal.
And now, funny thing is, instead of being worried people will judge me - I'm absolutely proud to be the one voice of reason in a sea of blind Obamabots.
But it would be nice to see more of me out and about - heck - next time I encounter another Patriotic wearing Lion, first round of drinks is on me.