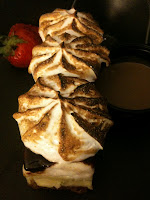 First, I forgot to mention the awesome dessert I had from Jackson's in Tampa Monday  night.. Marshmallow on top, vanilla cheesecake with layer of chocolate ganache and graham cracker crust. Served with Nutella dipping sauce! WOW. So good.
Anyway - back to the program!
Tuesday morning ( thunder and serious crazy wind kept me up most of the night)
we headed over to the Marriott where an AP reporter interviewed Dean/Russ and a few people from our group. Of course, all the Freedom Platform issues we were concerned about had to do with cutting spending/regulations - but this reporter wanted to talk about abortion/gay marriage issues. C'mon PEOPLE. How many times do I have to say - it's about the FOUNDATION of this country which is CRUMBLING due to overspending/over regulation? Unfortunately, social issues are nothing but window dressing right now. None of it matters if we don't fix our freaking economy! 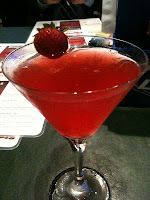 We sat in on some more amendment meetings.
Then we had lunch and I finally was able to catch up with one of the delegates who I'd tried to contact prior to going to Tampa. Mike Wallace lives in Maine and he is a young guy who worked on Rand Paul's campaign and is concerned with the same issues FW & the majority of Patriots are concerned about. We invited him to lunch with us at Champions which is downstairs in the Marriott. Our waiter remembered everyone's drinks from the day before. I mean, we're talking like 13 people! It was crazy!
I had the awesome strawberry martini again and a BBQ chicken salad that was so huge it could feed Michael Moore for a month.

After lunch, we shot some videos for FreedomWorks about how we felt about our experience at the GOP Platform Committee meetings.
Then we met for dinner at Jacksons while rain pounded the streets. Austin (The Producer who was a producer for Judge Napolitano's Fox show before it was RUDELY cancelled) sang an impromptu song. See the video above.
There was much laughter at the table. Oh, and I had the best tomato salad and this Sicilian Spinach salad made with pine nuts/raisins/ginger. And our waiters were also very awesome.
Oh, and I had the best wine EVER. When I told the waiter (who I called "Fisherman" (long story)) he told me it was a Dave Matthews Band collaboration - the label is "Dreaming Tree" and the wine is "Crush."
Of course - when he said it was from DMB - it explained why it was so FABULOUS. I hope the state controlled PA wine stores have it.
Have I mentioned how much I love the staff of FreedomWorks and the team I was with?
I love that there is so much diversity on staff and yet, the debates are friendly and thoughtful.
I hugged everyone before I left. And I am NOT a hugger!!! But these people feel like family to me.
It was a wonderful trip.
The fact that 11.5 of our platforms were incorporated (see my previous post for a list of our platforms - as well as my Morning Joe Mika video! click here) shows that the Romney Campaign is willing to work and accept the Tea Party platform of small gov, more freedom.
I left Tampa feeling very, very, optimistic of the election and if Romney wins, he will listen (and we will continue to keep the pressure on him!!).

Thank you Tampa! Thank you FreedomWorks staff: Russ Walker (also a delegate!), Dean Clancy (who is suspicious of wheat), Ryan Hecker (who I shared some laughs with regarding a delegate watching herself on the CSPAN monitor), Adam Brandon (who flew in and flew out way too quickly!), and Austin (see the video in this post - Austin needs his own reality show). And Heather - who we didn't meet but did all the travel planning!

There is cool. There is awesome. And then there is FreedomWorks! If you aren't yet involved with FreedomWorks or using their resources, what are you waiting for? www.FreedomWorks.org

And my Freedom Ninja Tampa family:

Kristin Minor (IN) - she tries to hide her angel wings under suit jackets.

Greg Fettig (IN) - knows how to unite disconnected tea parties.

Donna Driskell (GA) Poor Donna. She had such a bad head cold and yet powered through.

Thomas Zawistowski (OH) - Tom doesn't know this, but I have renamed him Bob.

John Kuzmanich (OR) - Married to Bella AKA Melanie. Doesn't let the fact he's surrounded by Libs in OR get him down. Also - did NOT bring me a maple bacon donut from Vooodoo donuts. But obviously, I've moved past that.

Ken Clark (CO) - Ken showed me the greatest tip on how to retain battery life on the iPhone. It was life
altering.

Vicki Dooling (NV) - Vicki had a busted ankle. She says she tripped and fell. I have a feeling it's from
kicking some Big Govt butt!!!

Debbie Wilson (FL) - Two tornadoes hit her houses in FL and her house in GA - you know what they say, like attracts like! (meaning Debbie is a whirl wind of energy and getting things done.)

Konni Burton (TX) - Everything is big in Texas - including Konni's laugh - which was loud and frequent - and her heart is huge. You can't be in Konni's presence and NOT smile in .7 seconds.

And a BIG THANK you to Ana Puig - who suggested to the powers that be at FreedomWorks that I be on the Republican Platform Committee - I totally minded my manners (most of the time) - so as not to embarrass her or the Kitchen Table Patriot family back here in Doyelstown!

And finally, here is the video of me that Austin, The Producer, who needs his own reality who,  shot - I'm sure had he known I'd be posting his impromptu singing - he might have used the "bad"' camera. heh heh.

The video sums my experience at the GOP Platform Committee perfectly!