FEARLESS - The ART of Breitbart 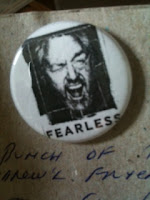 September 1st marks the sixth month anniversary of the untimely death of Andrew Breitbart. The man who inspired me to take action and to be FEARLESS. Andrew was known as a "connector" - introducing people who had similar ideas - or people who needed each other (one had an idea, a talent, the other could put that idea/talent into motion).
So, really, is it any surprise that even in death, Andrew would still be a connector?
Enter Jimmy Arone, an actor (you've probably seen him in movies) and a good friend of Andrew's. Jimmy reached out to me just by chance (though it was BECAUSE of Andrew - thus, my observation, even in death, Andrew is still a connector!)  and we've become virtual friends. (Read about Jimmy and Andrew here).
The other day I was having a down day after the RNC powergrab (read about the powergrab here). What did I get in the mail? Two "FEARLESS" Breitbart buttons from Jimmy. Serendipity? I think so! 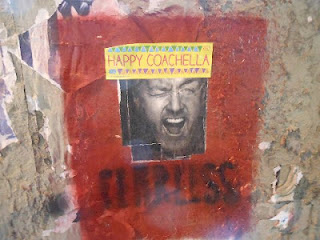 After Andrew died, Jimmy was inspired to "Paint Hollywood FEARLESS" and so he took to the streets, leaving reminders and inspirational art of Breitbart all around Hollywood.
I can't think of a better day to tell this story...so...in Jimmy's own words, here it is:


Some background into the artwork which was created after my friend, Andrew Breitbart, passed away...

Upon hearing the news that morning, I was in a state of shock and didn't quite know what to do. However, after attending the memorial service for Andrew, days later, I decided to throw myself into creating a number of art pieces, inspired by the man, as a way to honor his memory.

One of the first things I did, was to create a collage from the front and back covers of his book 'Righteous Indignation'. A new piece that was pure Breitbart. It had energy. It had humor. I titled it FEARLESS.

Then, I decided to steal a page from the book of Shepard Fairey. Late one night, a few weeks after his death, I took to the streets of Hollywood and plastered Andrew's mug with the word: FEARLESS on as many walls, around town, as I could. I had a good time with that.

Andrew, clearly understood the importance of pop culture in today's society and how it relates to the world of politics. And how, for the most part, art is controlled by those on the Left. As far as I was concerned, it was time for a change. What I did with my FEARLESS street art, is something I know he would have applauded and enjoyed. Some dark night, I hope to go out there and do it again. 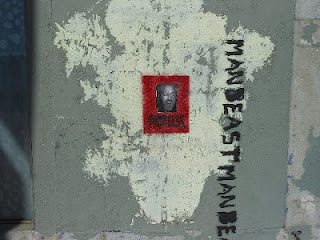 The FEARLESS T is another thing I came up with. Using the same collage, I found a woman who made a killer silk-screen and printed the T's for me. She did a great job. The result is a very cool and one of a kind T-shirt (click here for info about Breitbart T-shirts) . It's something, I believe, Andrew would totally dig. 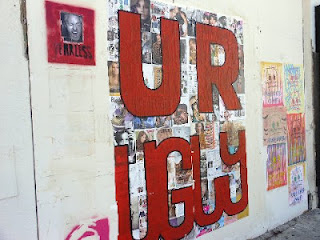 It would be great, one day to see thousands of people, who loved and were inspired by Andrew wearing one. To a Tea Party event (having a good time), to an OWS event (Behave Yourself!) going to the movies, on a trip to a museum or hell, just knockin' around the house on a beautiful summer day. We shall see...
----Jimmy Arone