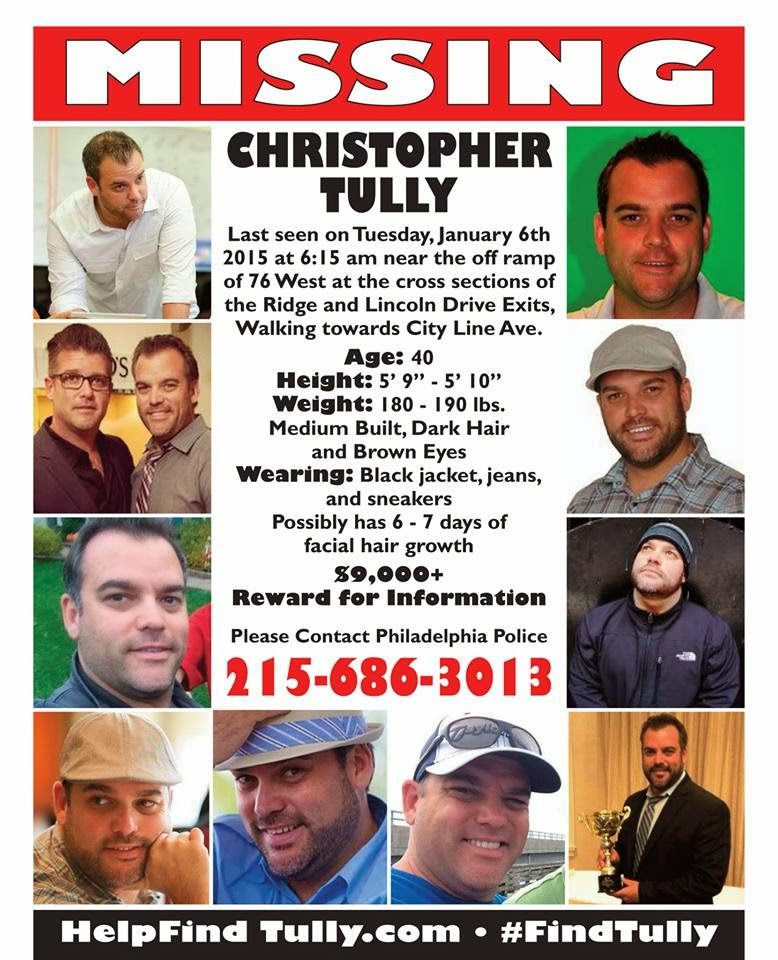 (What if Christopher Tully doesn't want to be found?)
1/26/15
UPDATE: On January 25, 2015, search and rescue crews pulled Chris Tully out of the river - according to police and autopsy reports, he had committed suicide.

After Tully's death, the family admitted on the morning of January 6th, Chris was on his was to Horsham Clinic for treatment. He had been awake for 48 hours.

I am sorry for Mr. Tully's choice not to continue his life - and while everyone remarks what a great man he was; he left 3 sons, a wife, and many students behind.

I worry that one possible reason - he ran away from his problems instead of facing them, will be lost along the way and give the misconception to the very students that exalted him that killing yourself is a suitable option.
If Mr. Tully was on a 'cocktail' of medications, I truly hope that the Tully family will use the money they are still asking for (and yet another fundraising site is asking for money saying Eddie Tully's fundraiser will not go to the wife nor sons) to prosecute the psychiatrists/doctors if they are responsible for misdiagnosing Tully - to publicly name them so other fathers don't leave children behind.

It sounds as if there are many missing parts of this story. The people that love him, of course, only want him to be remembered in a positive light, but I urge those who know him, to share the truth about this situation so that other people may learn and help someone they love before it is too late.

Ironically, the day Tully's body was found, my mother died. She had cancer and was in hospice. It
was a contrast that those who wish to live do not have that option, and those who have everything to live for, choose to die.


1/15/2015
As most people know, on January 6th, Christopher Tully escaped out of his parents car at they drove him to a *treatment facility (no-one is being honest about where exactly his parents were taking him) at 6:15 am in the morning.

He had his cell phone and it was turned off sometime around 11:30am on January 6th.

If anyone has followed the various reports, you'll see that it was reported Chris is bipolar and off his meds.

Then his brother, Eddie Tully, stated Chris had been on his meds. One of Chris's friends stated to me, "No one really knows if he was taking them or not, but we believe he was."

Various reports are circulating that Christopher Tully was newly diagnosed with Bi-Polar.

There has also been confusion as where he was living. The police report Philadelphia. Some media report Jamison. And some of his friends have reported that he lived in The Park at Westminster in Warrington with another person.

It sounds as if there was personal strife in his life, and I have to wonder if perhaps Mr. Tully simply wanted to escape and now that he has, it might be hard to return home since he has been labeled with a mental illness by well meaning friends and family who want to know that he is okay. I can see where this might be difficult. You don't want to disrespect his privacy, but you want to let the public know that bolting from cars in the wee hours of the morning is not something Tully has been known to do.

The Tully family has asked that (if) anyone is helping Chris Tully to remain in hiding to at least call a family member to let Chris's kids know their father is okay.

Please do not accuse the police of not doing their jobs - it seems Chris Tully has walked many different paths and they are investigating each one.