How The Greed Of GoFundMe Leads To Hateful Mob Mentality

Two very sad things happened yesterday which lead me to believe hate does breed hate - and people do not stop to think.

On 4/12 - there was a fundraiser held in Jamison to raise money for the care of the Tully children - which caused Eddie Tully (Chris's brother) to go off the deep end and Tweet, Facebook (on several different facebook pages) a very chilling rant against Kelli Tully - accusing her of causing Eddie Tully to commit suicide. Less  than 24 hours later, the rant has almost 500 likes. Most distressing are the people (who don't even know her) calling her horrible names. Many of these are students that Chris taught. No one can know what really happens between a married couple. And Eddie's social media attack will prove to the reasonable person that he does not have the best interest of his family, of Chris's children, at heart.
Eddie Tully alleges that Chris was 'abused' at the hands of his wife.
Chris has been described as a loving father. No one has disputed that. Would a loving father commit suicide to 'escape' the abuse of a wife, leaving his children in her care? The reasonable, thinking person would conclude that the type of father Chris was described as, would have fought to the end for his children if he felt there was abuse.

The Tully boys have lost their father - they are devastated. Now they have an Uncle who is bringing even more pain into their lives - and people who are commenting critically about their mother. These people claim to 'love Chris' - but if they truly did, they would not want to do anything to harm his children.

"Still can't believe that this bitch can have the audacity to use the Christopher Tully name to raise money for herself when she resented his popularity so much that it made him have to be put on medication that eventually killed him. She hated the way people felt about him. Yes hated it!!!! Sorry I just can't keep quite anymore. Just can't. Oh and yes I'm all for his kids being taken care of, he left her plenty of money!!! And when my family offered to open a trust for them she flat out told us not to. Don't believe me? I'll let you hear it for yourself if you like to hear the messages!!! Again sorry been bitting my tongue too long. I think it's time the truth comes out. He couldnt fight for himself because of how she put him down. It's too late to bring him back but I can't live another day holding this in. This is not opinion....he left enough behind for his own words to be heard. If you have been confused about the tragedy that took place don't worry his voice will be heard!!! I owe that to him."

My observation: "He left her plenty of money!" - Who is Eddie to judge how much "money" is enough? What if the boys want to go to an expensive college? Does Eddie have children? Does he even know how much money it costs to raise one child let alone three?
"she resented his popularity so much that it made him have to be put on medication that eventually killed him" - Wow. That's a serious statement - pretty much calling her a murderer.
He offered to set up a trust fund and she refused. Hmmm, judging from Eddie's name calling and total disregard for his nephews, I'd have to say she made the right choice. I certainly wouldn't 'trust' him either.


Dolores Francia Ed, she looked cold on the news. She was jealous of him maybe. But trying to cash in on a good mans memory...just sick. It's a good thing you told us. I am proud that u had the courage to come forward. She is not a good person.

Hey Dolores - You should be a forensic TV specialist. That you are able to judge that she is a cold jealous person from seeing her 10 seconds on the news - that is a rare talent. So, it's not okay for the mother of Chris's kids to raise money for them, but it's okay for Eddie to collect money?

Anna Kelly I couldn't feel more sad for u Eddie. I do know this...if this were me, I'd do exactly what u are doing. Truth be told. Chris can't rest in peace if people aren't made to understand he wasn't mentally ill he was abused. Don't u dare hold back. And to those who are negatively responding to ur post: please continue to comment. It gives those of us who don't know her personally a better insight of the family she comes from and somewhat explain why and how she ended up SO FUCKED UP. Love u Tully family and I'm thinking tonight will truly be the night that Chris will finally rest in peace. What a great big brother u are...

Hey Anna - thanks for clearing up that Chris wasn't mentally ill - he was abused. Abused enough to leave his children in the hands of the woman that allegedly is abusive? Would a 'great big brother' hurt his nephews so publicly?

Tiffany Hand Rittenhouse I new Chris in grade school and he was a great, happy, go lucky person, but I knew there was something more to this because you never heard from her on the news and most importantly she looked like she didn't give a shit in the picture they showed on the news with his sons. She is a total BITCH and yes KARMA will get her!!!!!!! Eddie Tully you have helped yourself and helped us understand how this really went down. Keep doing what you have to do. GOD BLESS YOU AND YOUR FAMILY.

Hey Tiffany - You should go into business with Dolores. "Doesn't give a shit" - wow, that's so insightful for you to notice that. Also, it seems you are a Christian with your "God Bless" - I don't know that genuine Christians would call people they know nothing about a BITCH.

All these people (and far more) are passing judgement on a woman they don't know. It's a social media mob witch hunt. It's not only sad - it's frightening to watch the hate unfold.

Actions speak louder than words they say, and in this case, not only have Eddie Tully's actions but also his words have revealed his real character. At least, to anyone who is capable of thinking clearly.

This will be my last post regarding the Tully's. Eddie has shown his true colors. If he truly cared about his nephews, he would quietly work out the problems so as not to cause public humiliation to Chris Tully's boys. I admire Kelli's restraint and courage at not being drawn in to a public battle and hope she quietly continues to keep her head above the fray. The people that matter the most know the truth.

On January 2015, Chris Tully went missing. Tully's friends and brother went into action a few days later - using social media to alert people. In a weird twist of fate, I was contacted by one of Chris's friends because I owned the domain name FINDTULLY (from trying to help find a lost dog named Tully - which did not turn out well. Tully the dog is no longer with us either).

Everything about the story of how Chris Tully went missing was confusing. For anyone who followed the story - they'll remember the many changes. He jumped out of a car at 6 in the morning. Then days later he it was his parents car. Then it was because he had mental illness. Then he was on medication. Then he wasn't on medication. Then Eddie (and many others) accused the police of not doing enough.

In private emails I was sent from his friend/former students - I was told there were family problems. He was known to party but didn't have a drinking/drug problem - and then other people contradicted that and said he didn't drink and wasn't having problems.

Publicly, it was listed that he lived in Warrington, Jamison, and Philadelpha.

Eddie Tully set up a GoFUNDme for his brother stating the money would go to help finding him and be rewarded to the person/people who helped to find him. Totally understandable.

Then a GoFundMe popped up for Kelli Tully - Chris's wife and the mother of his three children. The GoFUndME was set up by a friend of Kelli's and stated that none of the money from Eddie's GOFUNDme was going to be shared with the children.

It was odd that weeks after Chris Tully's body was found, Eddie still had a GoFundMe - the initial "goal" was 10,000. When it exceeded 10,000, he upped the goal to 15,000. And when it exceeded 15,000 Eddie upped it to 25,000. Eddie states on the gofundmewebsite: "The family will also put funds toward the cost funeral services and provide assistance to other family in need of assistance in dealing with a tragity such as this."  (that was taken directly from the website) http://www.gofundme.com/k0qapc

On 4/12/15 - Eddie contacted me and stated he has made donations (in February) to various organizations that helped look for Chris. 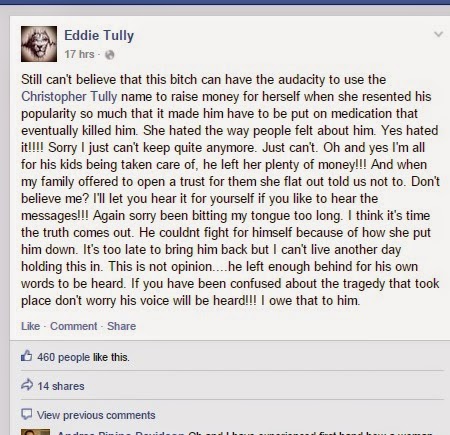