Lindy West is one confused and unhappy "WOEman."
Here is a review of her book: SHRILL.

Lindy West is a Seattle-based writer, editor, and performer whose work focuses on pop culture, social justice, humor, and body image. She's currently a culture writer for GQ magazine and GQ.com and a weekly columnist at The Guardian, as well as the founder and editor of I Believe You | It's Not Your Fault, an advice blog for teens. In 2015 she wrote and recorded a story for This American Life about confronting an Internet troll who impersonated her dead father. She also was listed as "Internet's Most Fascinating of 2015" by Cosmopolitan.com, and helped launch the viral #ShoutYourAbortion hashtag in defense of women's reproductive rights. 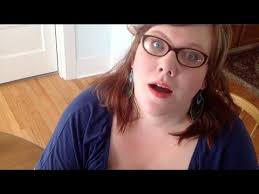 “Three aspects of the self betrayer's conduct always go together: accusing others, excusing oneself, and displaying oneself as a victim.”

Oh Lindy Lindy Lindy.
This book is so...sad.
Lindy admits she was raised in a wealthy home with a progressive mother. I can somewhat identify, though my family didn't talk politics, my mom was a product of the feminist movement.
However, like Lindy, my mom was torn between two worlds.
Wanting to be loved and hold on to traditions of romance - and yet wanting to be independent.
I also, in a way, am like Lindy in that I was highly influenced by pop culture. I thought "progress" meant sexual freedom and gratification and putting pleasure on the top of the "To Do" List.
As I grew older, I realized that not only is pleasure fleeting, it's disabling and dis-empowering. It corrupts our spirit and soul - which then leads to what Lindy is experiencing: a very troubled angry person who lashes out and throws everyone under the bus (with the pretense that "it's for their own good").
Don't get me wrong - what is the point of being an author if not being authentic. I 100% believe that it's great to name names and shame people who have mistreated people.
HOWEVER, the theme in Lindy's book is ANTI-SHAMING people! She feels she's been bullied, but then turns around and does the exact thing she claims to be a victim of.
This book is not funny.
It's not empowering.
LIndy claims to be self-confident; her writing speaks to something different: she has no confidence and so she clings to a movement that does nothing but confuse and divide its members.
Of note on being part of the Twitter panel that "seeks to provide a safe place from bullying."
I read Shrill just as Azealia Banks went on a Twitter rampage against Sarah Palin; calling for Palin to be gang raped by black men and assorted other horrible tweets.
Banks was not muted, nor was she kicked off Twitter.
However, Twitter (thanks to the feminist "safety council" in which Lindy is a part of) has been responsible for shadow banning many prominent conservatives who have never said anything as hateful nor violent as Banks.
Chuck C Johnson, Robert Stacy McCain, Milo Y, etc.
The thought of "silencing" any speech no doubt has Ray Bradbury and George Orwell turning in their graves. The party of "progression" is now regressing to the era of book banning.
And if Lindy truly cared about bullying and shaming, well then, she'd stand for ALL women and not just select women.
By the end of the book, I found myself feeling sorry for Lindy. She is confused and being exploited by a group of people who seek power and gain by promoting victimization, by dividing us, and distracting us.
The book is hypocritical, lacks integrity and authenticity. It's hard to believe she is a champion for women when she only comes to the defense of a certain few.
Freedom of speech is the most powerful weapon we, as a society have. Those that control speech control power. The more a society is secure, the more those who want to rule need to divide, decay, district, in order to ‘save.’ And the first thing they target is speech and status. Those that advocate collective rule are distrustful that man is capable of making his own choices.