Buzzed Off My Hair For ALS

In my life, I have been not so attractive, and I have been quite attractive (not to brag or anything).
Most people would call me cheerful, creative, and free spirited. 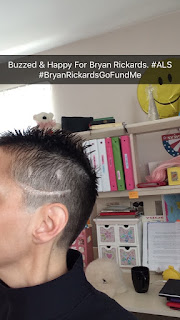 Some people, like my husband, call me crazy.
As some of you might remember, I wrote about my fathergetting diagnosed with ALS at the age of 48 and losing that battle shortlyafter his 50th birthday.
He was an inspiration because he never complained and his sense of humor remained sharp and strong.
Recently, I’ve learned of a few deaths caused by ALS who were either members of local police departments or close family members of police I know.
And then it was discovered that Bryan Rickards – K9 Officer from Abington- had been diagnosed with ALS in February of this year (after almost a year of searching for an answer as to why his body seemed to be going wonky).
I first met Bryan a long time ago – when I was a Store Detective (security guard – but store detective sounds much more exciting).
I LOVED that job. It was probably the most fun I’ve ever had at a job. I worked for Bloomingdales in the Willow Grove Mall.
Bryan would often stop by to visit (as would many Abington cops when they were bored). He always made me and my co-workers laugh. He was always funny, optimistic, cheerful. And almost always had a crazy story.
I never had a close relationship with him and didn’t see him very much for years after I quit. Then a few years ago I started to see him once or twice a year at k9 events.  Bryan is one of those people as soon as you see him – you can’t help but smile and be happy that he is around.
So when I learned he had ALS – I was heartbroken. And because my father had ALS, it always seems to strike me a bit more because I am all too familiar with the disease.
Lately, I’ve known many sad situations with friends being diagnosed with cancer, friends having strokes, one young death in the family (all w/in a few months).  I’m starting to feel like I can’t do ENOUGH or say enough or pray enough (and I’m not even religious).
Bryan had written on his facebook that he doesn’t regard ALS as a punishment, but more as a gift, because it will give him time to heal relationships that need healing and time for him to make peace where needed.
And that was really the only serious thing he has said. He’s been staying positive. His sense of humor is still as on point as ever. Truly, he is inspiring.
One day, last week, I’d shaved the sides of my head a little bit. And then I decided, “HEY, WHY NOT SHAVE MY HEAD!” in order to raise awareness for ALS and funds for Bryan’s Go Fund me that one of his co-worker’s wife had set up for Bryan and his family.
I even put had the barber shave a little Happy Face into the side because Bryan is trying to remain upbeat and happy, and  – thinking at work, customers would ask  me about it, and I could tell them about Bryan’s story.
Well. This was a bad, bad, bad, idea. It was a good intention, but for me, a bad idea.
Also, knowing Bryan, he probably would much more have appreciated and got a big laugh if I would have put my fake boobs into a pushup bra and wrote BUST ALS across them. Who knows, maybe that’s still an option (it would probably get much more likes and raise more awareness on Instagram than my buzzed/happyface haircut did). To which I thank the very few people who liked it (you know who you are!).
The short lesson of it is that, buzz cuts on girls (even with Happy Faces) does not inspire much conversation with my customers. At a somewhat conservative grocery store.
The cut does not look good on me.
My husband calls me Larry.
Though very kind people say, “Oh, you’ve got the face to pull it off!”
At work the first night, I was so uncomfortable (but never will I be as uncomfortable as Bryan or those struggling with serious illness).  I learned many, many lessons about beauty that night and how it influences people. About how we present ourselves to the public and how it does make a difference. Only three people asked me about my hair/the shaved happy face.
The next shift,  I wore a pink wig. Well. The pink wig got MANY compliments. Many people asked me about it, and I was able to mention Bryan and his inspirational perspective on ALS (as well as his GO FUND ME) much more frequently. Old people loved it, young people loved it. It was met with positive reaction.
Geez, instead of buzzing my hair, I should have just worn a pink wig! 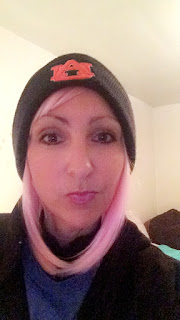 But that’s what happens to me sometimes (and I’m sure it happens to other people as well) – we get so caught up, we want to DO something. Like last summer when one of my childhood best (and also funniest) friends lost her 17 year old daughter in an accident. I wanted to drive my car (which barely makes it thru inspection and every warning light is lit) half-way across the country to be there.
My husband said, “Don’t call me to come and pick you up when your car breaks down!” and my best friend said, “I’m working that weekend, so I couldn’t come and get you.” I was quite mad at my husband, but looking back, my childhood friend who had lost her lovely daughter was surrounded by a large family /friends and community and though I know she would have appreciated my support, I could support her just as I’d been doing by keeping in touch with her.
How much we should do, all depends on the person, too. Some people don’t want any attention. Some people don’t really want attention, but they appreciate small gestures. Sometimes it's hard to gauge. And some people want to bring awareness to their disease (watch the movie Gleason for a very inspiring movie about ALS). There is no right or wrong way to handle an illness. And I’m sure each person has their own unique experience.
But the one thing I have learned, from my father, and now, reiterated by Bryan, is that it is all about perspective. It is all about silver linings. It’s all about finding humor where and when you can. It’s about turning every obstacle into an opportunity; to bring awareness, knowledge, to make someone laugh, to make someone feel valued, to give someone inspiration. Some might want to reach out and be inspiring to the world, and some might just want to be inspiring to those who are closest to them. But I think that the ability to rise above an illness that that is truly a son-of-a-bitch, is really one of the only ways to not let it get the best of you. Not everyone can rise. (Surely, I don’t think I would). But everyone can try. And there are many inspirational people like Bryan to lead the way.
Please consider donating to Bryan Rickards Go Fund Me. If you don’t have the money, please just consider posting it on facebook or passing alone the information, or praying for him and his family.

“We who lived in concentration camps can remember the men who walked through the huts comforting others, giving away their last piece of bread. They may have been few in number, but they offer sufficient proof that everything can be taken from a man but one thing: the last of the human freedoms—to choose one’s attitude in any given set of circumstances, to choose one’s own way.”  -Viktor Frankl

Below is a poster you can copy and ask to hang it at work or anywhere you think it might help. 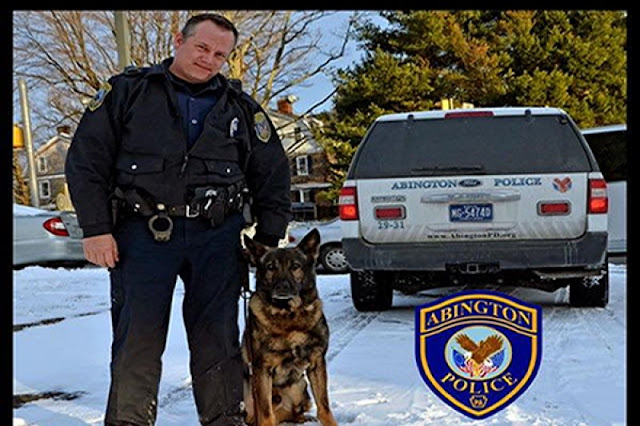 Officer Bryan Rickards has served the residents of Abington Township as a Police Officer for the past 19 years. Officer Rickards and his K-9 partner Ivan, are an award winning team, trained in narcotics detection, and patrol operations certified.

On February 16, 2017, Officer Rickards was given the devastating news that he had been diagnosed with ALS (Amyotrophic Laterals Sclerosis). This is a rare and progressively debilitating disease that will prevent him from ever being able to return to work as a police officer.

Bryan has 3 young children, and could really use all the help he can get. The Abington Township Police Association is collecting money to assist in defraying medical costs both current and future and support his family. All proceeds will go directly to Officer Rickards and his family. There is a GoFundMe page, along with a Beef and Beer fundraiser scheduled for April 8, 2017 have been set up to do just that!