Yesterday, May 31, I intentionally went to a plastic surgeon and had my fake, saline, toxic boobs punctured in order to deflate them, and later to remove the implant (and possibly the capsules).
It is almost 10 (2007) years since I had them “put in” and I know when people do things the regret, they often say, “I don’t know what I was thinking at the time!”
But I do know what I was thinking.
It is human nature for us to aspire. I’ve come to learn that there are 4 things that we aspire toward: we aspire to be better, to belong, to believe, and to be someone.
For me, getting fake boobs was aspiring to get some of my youth back. To be “better.” And to belong to the “sexy” group.  I was influenced at the time by all the fake famous boobs in our culture. Bay Watch, Carmen Electra, that Spice Girl married to that Soccer Star. Even a few of my friends had gotten boob jobs.
After three kids, my once perky little “C”/big “B” cups were droopy.
After I’d gone to a nudist beach (so boring, a lot of old people and families with kids! It was horrifying), I remember one of the people I’d gone with had mentioned to another friend that I had droopy boobs.
Well, this stuck with me and I was forever wearing pushup bras and very self-conscious and tried to never get caught with my bra off.
How crazy that I put so much emphasis on my breasts, right? But all you have to do is pick up any magazine or watch any show or work around guys or walk into a mechanics shop or listen as the world eagerly anticipates the drop of the Sports Illustrated Swimsuit edition. “Who will be the cover model?” everyone asks– when really, no one cares, they just want to see perky boobs and perky bums – women that look like they are 15 (or perhaps, 13 as sexy seems to have gotten younger).
Then you’ve got the liberals and feminists and Cosmopolitan magazine articles saying beauty doesn’t really matter (and yet, those same liberals/fems/CosmoArticles are the producers, directors, writers, putting the money behind the sexy actresses and models).  Add in a president cheating on his wife with a young busty intern.
It’s all so contradictory!
On the one hand I’m told be confident of my body, no matter what, and on the other hand, I’m given the message, if you want to be loved, admired, gotta aspire to have boobs that smile at the world, not the sidewalk.
When I had the opportunity to have a boob job in 2007, I researched it. It was safe. I knew saline was not meant to last more than ten years (though I’d read articles that some women never changed them.) I was certainly not told about the possibility of Breast Implant Associated Lymphoma (also known as BIA-ALCL) Though the medical community was aware of this, it was not being talked about. And never did I even stop to consider that the way they would implant my boobs (through my armpit!) might damage the lymph nodes. I was going to a very well respected plastic surgeon (who my friend had used) and he didn’t mention it. Though, you would think as a paramedic, I might have thought about it. You would think even if I had not been a paramedic, it would just be common sense!
Here is the thing that plastic surgeons mention, but they don’t really discuss. When something (anything) is placed in your body, your body says, “Wait a minute. One of these things is not like the other and does not belong here!” And your body, miracle that it is, will being to form scare tissue around that object trying to wall it off from healthy organs. It then becomes what it known as a “capsule” around a breast implant. And even though I had saline, the shell is made of silicone. Silicone that is considered a bio-hazard.
Some ladies are fortunate in that their bodies ‘lean into’ the implants. They don’t form very hard capsules. But if you do a google search for capsule contraction surgery on youtube, you will see (very gross!) capsules that are like cement. Some that are like layers upon layers of calcium.
I knew none of this 10 years ago.
And I went and got REALLY HUGE BOOBS because two doctors tried to tell me I needed a lift and implants, but the last doctor said if he just filled the implants really large, it would be like getting a lift AND implants and I’d be fuller and much perkier!
The picture I posted in this article is of my breasts before they were deflated. Notice how thin my neck is? I have been heavy, medium, and thin depending on different stages of my life.  But I have small wrists, small neck, and my body frame is meant to be thin/fit. When I added those huge melons, it just made everything out of whack. For the first year after getting the boobs, I actually gained weight so I looked more proportionate.
But those fake boobs would end up teaching me a-lot about myself, about our culture, and about doctors and medicine, and hysterical women, and women (and men) who would help each other sight unseen, simply because they shared a common bond of boobs.
To Be Continued! 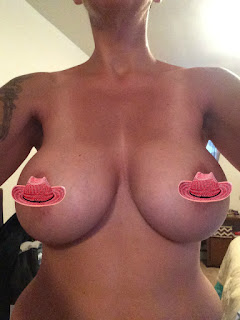