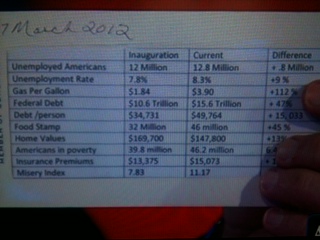 Representative Allen West (Florida) was recently on Fox and Friends and held up a "Top Ten Indicator" card that he updates every month.
The card is representative of how our economy is doing under Obama's failed "leadership." I took a picture of his card, and thought it was a brilliant idea. 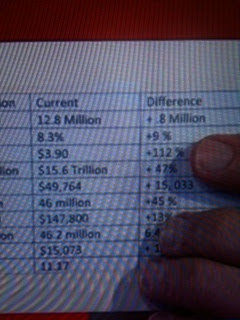 It is so obvious to me that Obama's goal is to have as many people on welfare, food stamps, and unemployment as possible. Our country is close to having almost 50% of the population dependent on Government. If and when that occurs, Obama stands a good chance of being re-elected. Why? Because those American's who've become dependent on the government become fearful that the new president or the new political party will take away their security. The promise of jobs and unlimited potential and great success will fall on deaf ears. People would rather live in poverty in a false sense of security rather than be independent and free to become successful and well off.
It sounds ridiculous, right? But think of women who are the victims of domestic abuse. They STAY in their relationships! Even though family and friends are willing to help them - they stay with a person who berates, belittles, and beats them because they have come to rely on the person for money...for food...for shelter. Not only that, but their self-confidence is shot. They feel they don't deserve better. They feel they can't do better for themselves.
Being on welfare and food stamps - being dependent of the government is the same thing. The longer they chained to handouts - the lower their self confidence. They start to believe they are unworthy or not deserving or not capable of something better.
It is so, so, important to me that we make people aware of how our country is rapidly declining. Obama pretends (slightly) that he cares about the faltering economy, the high unemployment - yet his ACTIONS speak otherwise. What are his solutions? A speech in which he says he is 'creating a panel' to investigate.  He's done this with jobs, the deficit, and oil, and his latest is human atrocities (of which Samantha Power is the Czar - Power hates Israel and is a proponent of war).
Meanwhile, he's over regulating the energy industry which will ultimately mean the death to the coal industry and has cost and continues to cost thousands of jobs. He's raised the tax rate on corporations - we now have the highest in the world - which is causing corporations to move over-seas.
This is why I think Allen West's top 10 Indicators card is a great idea to keep on hand - or to stuff inside newspapers in newspaper boxes. West updates it every month, which I think is a great idea.
I encourage every Patriot to make their own Top Ten Indicator Card and to refer to it often when discussing the decline of America under Obama.
Do It For Freedom. Do It For Fun. Do It For America. Do It For Breitbart.