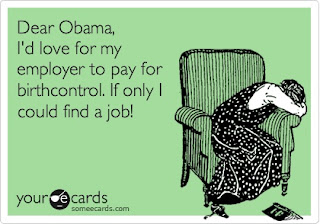 Today, Obama is  holding a women's forum at the White House saying Republican policies would reverse progress that his administration has made.I'm sorry, what progress would that be? According to the Bureau Of Labor Statistics: Unemployment under Obama has risen from 7.0 to 8.1. The poverty rate of women has risen from 13.9 to 14.5 THE HIGHEST IN 17 YEARS. The poverty rate for black women? 25.6. For Hispanics - 25%.
But Obama is banking his election on dumbing down women (well, Democrat and Indpendent Women, because Conservative and Libertarian women are smart enough not to fall for his birth control fictional story line.) So, when the Liberals accuse you of not being on the side of women, mention the above numbers. To The Mattresses!