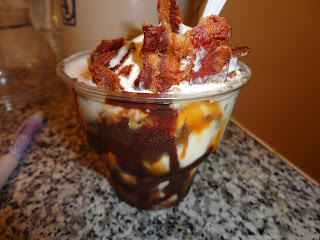 So many things to write - so little time. And I still have a review for Coach's Steak & Hoagie in Dolyestown to do. (If you're reading Coach - it''ll be done by Monday! Food was awesome, no worries!).
I'm gonna keep it short and simple.
Tonight it's about the Bacon Sundae from Burger King and the American Flag Rally in Harelysville.
They have something in common - The American Flag stands for hard won Freedom - and so does the Bacon sundae. Who ever thought we'd see bans on sodas, feeding the homeless - and did u know Michelle Obama got the Mars company to stop making super size candy bars starting in 2013? Yep.
So after the awesome Flag rally (on this day of the American Flags birthday) hosted by the Central Montgomery County Tea Party - I stopped to have a bacon sundae at Burger King before it was BANNED.
For fast food? It's wonderful. The trick is dipping your spoon in the bacon, chocolate fudge, & caramel to experience it all at once. #Flavorgasm. It's everything a dessert should be: salty, sweet, crunchy, smooth.
A gazillion stars! I didn't eat it all - as it comes in at 510 calories. Only had a few bites - but that was enough to satisfy my sweet tooth. SO TAKE THAT MICHELLE OBAMA!
American Flag rally - awesome!
I met Joe - who drives around this really cool old car. He's not a tea party person, he's simply a Patriot! He takes his cars to the shows and sets it up like a car hop - complete with tray and food. He was wearing a custom made flag shirt. Hey Joe, if you're reading this - send me an email so I can get the lady in Arizona's address!
I met Ken - who is a Twitter "friend" - I always love meeting Tweeters in person. He is super cool. You can follow him @KenSouder
Just wish I'd had more time to talk.
Rep. Mike Fitzpatrick showed up. Which was awesome. And Sam Rohrer gave a long speech. Long. Speech. But that's cool.
I don't know the lady who sang in the beginning - but she was fantastic. Truly talented.
So, that's all I got for now!
Cheers To Freedom!
Breitbart On!